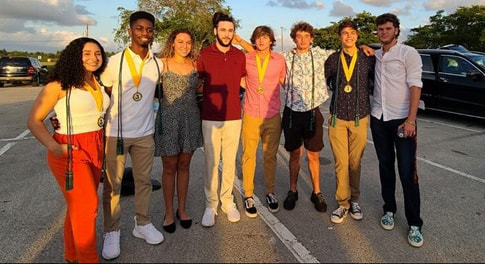 2021-2022
Benitez Works with Pros During a Summer Internship 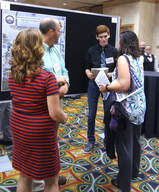 Baldwin explains his results.
Baldwin Presents Research
Normally, educated scientists present their findings and conclusions at the Greater Everglades Ecosystem Restoration (GEER) Conference. However, at the 2017 event, junior John Baldwin, shared his internship experience in a poster presentation along side the professionals.
Baldwin worked in a science lab at Florida Atlantic University. The pilot program enabled students to gain primary research experience in active university labs through supervised independent projects in Everglades science. The poster presentation, "Bringing the Classroom to the Science" joined Baldwin with his supervising professor, Dr. Brian Benscoter. 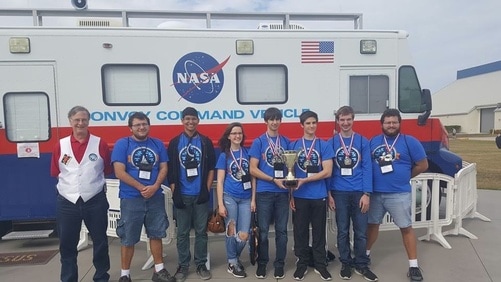 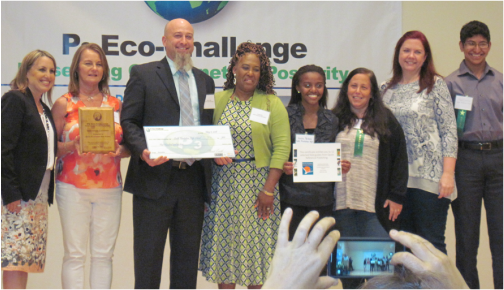 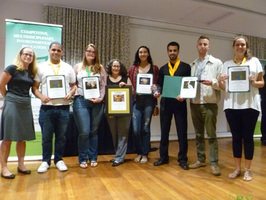 2014 Champions
In 2014 for the seventh consecutive year, students in the Environmental Science and Everglades Restoration magnet program at South Plantation High won the Fairchild Challenge. The multi-disciplinary environmental competition is sponsored by Fairchild Tropical Botanical Gardens in Miami.
The Paladins (Mazin Hamad, Jack Komacek, Nick Angle, Chris Valdivieso and Toijun Wiggan) captured First Place honors in the Sounds of Nature: Composition and Performance option. In the Citizen Science: Be a Part of the Solution option Jonas Baptiste and Katie Van Winkle also were first. The video documentary of the Gardens and Green Space, edited by Raphae Mikelstein, captured first as well. The environmental debate team, Seaira Crea, Darrion Johnson, Tamir Rabinovich, Jennifer Moscovich and Richard D'Albert, took second place for their performance in the Senate.
Special Merit recognition was given to Simone Yen in the Plant Exploration Writing for her In-Depth Focus on Crops; to Jasmine Spitzer-Smith, Nerissa Mape and Natalie Arnold for their Excellent Research and Highly Original Green Cuisine: Fairchild's Food and Garden; and Jasmine Spitzer for Use of Space Concept in the Design Your Future Garden option. South Plantation also scores a Special Merit Award for a Well Written and Comprehensive School Comprehensive Plan: Looking Back and Planning Forward.
Pamela Krauss has been the coach of the team for the eight years South Plantation has competed.  She credits much of the school's success to the community mentors who have worked with the students over the years. 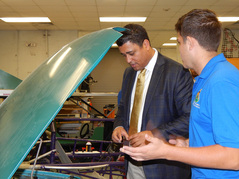 MSA director tours SPHS program.
For the second consecutive year, the Environmental Science and Everglades Restoration magnet program at South Plantation High won the national Magnet School of Excellence Award. It is the top category in the recognition program sponsored by the Magnet Schools of America organization.
Magnets are evaluated on student achievement, innovative and engaging instruction and curriculum, community engagement, professional development and a commitment to diversity. The awards are given to select school nation-wide.
Previously, SPHS won three Magnet Schools of Distinction honors, the second highest award of recognition. Awards are presented at the National Conference on Magnet Schools in the spring. 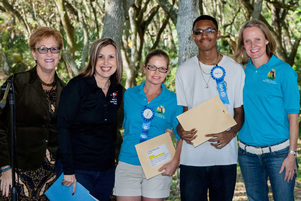 2014 Water Matters Essay Contest
Each year for Water Matters Day, Broward County's Environmental Protection Department holds an essay contest. In March, Jeffrey Neuman's entry won second place honors. For each year of the contest, a South Plantation student has scored one of the top three places.
Neuman was unable to attend the presentation, and Marlon Hall accepted the award for him. In the photo are Broward School Board members Nora Rupert and Patricia Good (Chairperson), teacher Jessica Brown, Marlon Hall, and Principal Christine Henschel. 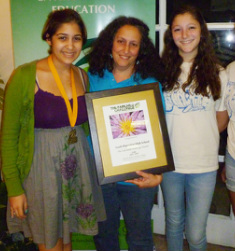 2013
For the six consecutive year, students in the Environmental Science and Everglades Restoration Magnet program at South Plantation High won the Fairchild Challenge, a multi-discipline competition relating to the environment. They competed in 10 options ranging from art to science and earned the Gold Award (and $1,000) to continue their environmental initiatives.

Students Coordinators who led the 2012-13 Paladin team were Stephanie Rodriguez and Maya Halaly. Rodriguez created a winning magazine that documented the Garden and Green Spaces option.

In the Urban Sustainability Project category, Mary Turner won a perfect score and First Place for the "Planting and Growing Gardens" model she designed and built. Matthew Beck and Cameron Robertson took First Place for their vertical garden in the "Growing Food Made Easier" category. South's other First Place winner was in the Plants and Water Option where Aaron Jiles and Casey Gray created a video with interviews about water usage. 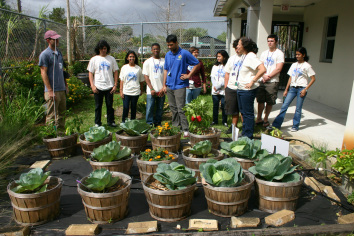 As the only teacher in Broward County who has recently taught a botany class, she focused on an Agrocology point of view, and her classroom door opens into multiple gardens. “Students, most of whom have never touched soil or set foot on a farm, learn how to prepare soil, germinate seeds, fertilize, irrigate and grow crops on a small, garden scale,” she said. “We use Florida Ag in the Classroom modules and materials (Life from the Land, Growing a Nation, Project Food, Land, and People).”

Krauss supplemented her classroom work by bringing in agriculture guest speakers: beekeepers, local farmers and an executive from U.S. Sugar. She took students on an agriculture field trip to U.S. Sugar, annually as all magnet students study agriculture from an economic view in the freshman Everglades research class. 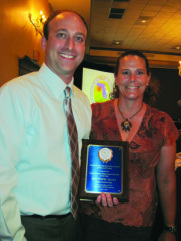 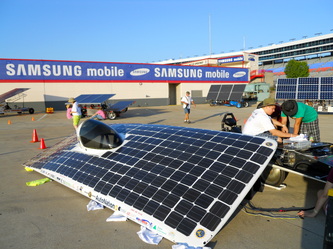 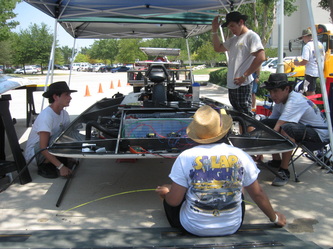 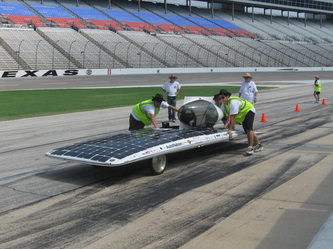 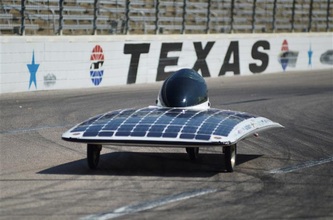 July 2011, the Solar Knights drove a new car in a different class. Advanced Green Technologies helped the team with purchase of a used card from McGill University in Canada. The new high-tech car was a challenge to the team, but the team won its division.

The Broward County Environmental Education Council hosts an Envirothon each year with the county winner advancing to the state competition. Over the last five years, two teams from South Plantation have competed in the Broward County Envirothon winning first or second place each year. The school's Horticulture team is successful as well with magnet students on the team. 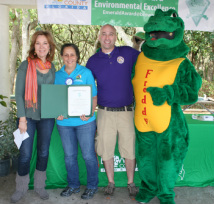 In March, Broward County's Department of Environmental Protection and Growth Management hosts Water Matters Day at Tree Tops Park in Davie. At the 2013 event, Broward County presented the magnet with an Emerald Award for its environmental initiatives.

For the essay contest,  a new topic is assigned to students. They are required to research the topic and explain the reasons for their opinion on the issue. Magnet students have placed first, second or third every year.

Essay winners through the years

Broward Schools' Partnership of the Year

Every year the school districts selects a Partnership of the Year. The magnet has won the high school division twice: first with the Broward Office of the South Florida Water Management District who has partnered with the magnet since its beginning, and then in 2011 with the City of Plantation's Landscape Division. 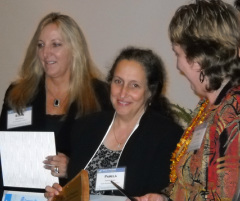 At the second annual Serve-to-Preserve Green Schools Awards Oct. 12, 2011 in Palm Beach Gardens, South Plantation High teacher Pam Krauss won the top teacher honor and $1,500. The Broward County School Board won the District Division.
For the last eight years Krauss has taught students in the Environmental Science and Everglades Restoration magnet program, creating the Research 3 (Sampling and Analysis of the Upper K-O-E watershed) and Environmental Law curriculums. She is one of the few teachers in the state to teach Botany. Her Green Waterwise project involved using rain barrels for irrigation of the 12 gardens her students created and maintain through the calendar year. The multidisciplinary project involved art, physics and science. The barrels save up to 52 gallons a day and use a solar-powered irrigation system designed and built by students. Also, her students have been the Champions of the Fairchild Challenge for the last three years earning $3,500 in grants for the gardens.
In 2009, Krauss was one of three finalists for the Governor's Serve-to-Preserve Class Division. AP Environmental Science teacher Allan Phipps won the teacher division for his students’ work with solar/alternative energy as they were the only students in Florida to enter and win the national Solar Car Challenge.